Some assembly (and alcohol) required

Chris was right... It's never good if a couch comes in a box.
We also should have got the hint when the sales girl told us "pick up a case of beer on your way home."
We ignored the warning signs and rushed on home to put together our couch-in-a-box.
Lets be honest people, beggars can't be choosers, and this couch was only $150, plus $150 for the slip cover (I got it on sale with a coupon and a raincheck).  That is cheaper than Ikea, and it looks a lot fancier (in my opinion) than Ikea couches (no offense to Ikea, I still love them, but not their couches).
$300 for a couch-in-a-box seemed like a pretty good deal to me.  Plus, I generally like putting things together.  Chris, on the other hand, pretty much hates assembling things.  We make a quite the duo.
So.... Chris and I brought our giant box home (and didn't stop for beer).  The first problem was that someone was parked in front of our house.  Here we are with a GIANT box in the back of our car and we have to park way down the block because someone decided to park in front of our house.  Granted, there are no "reserved parking spots" but there is an unspoken mutual neighborly respect that keeps us all from parking in front of each others house (except for this jerk).
Anyway, we got it in the house and open the giant box and took out our couch-in-pieces.  Chris is already getting mad about how many pieces there were, but I poo-pooed his grumbles and started getting everything set up.
I was not daunted until I saw the mini wrench that they gave me- it was very similar to Ikea's allen wrenches.
Anyway I get one side attached and all was going well.  When we get to putting the base and the seat together, we realized we did something wrong.  We got halfway through screwing the bolts in and realized they are not lining up at all.  So we have to unscrew all the bolts and try to get everything lined up, so we have to start over completely.
Apparently you have to be much smarter than Chris' & my brains combined, because this bad boy was like a horrible puzzle that was missing pieces.  At one point Chris got so frustrated, he started mumbling about why this piece of crap was only $300 and that we shouldn't have bought a couch that came in a box.  He then had to take a break.  After his break, he felt much better:
I was out of my favorite beverage, as I had drank my last one while painting the night before, so I just kept working.
I ended up working right on through Chris' break and figured out that starting from scratch for the 2nd time did the trick.  Chris took the job of stuffing the pillows and cushions into their slip covers while I got the couch all put together (with a socket wrench- why didn't I think of that sooner??)
The couch was complete, and what kills me is that it is essentially covered with a softer version of the back side of velcro. 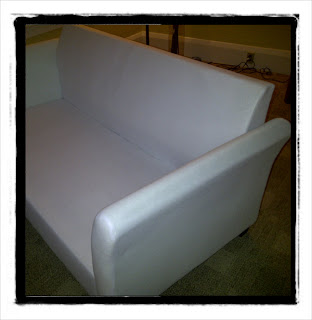 The velcro really helps the slip cover stick and stay in place.
Now after nearly an hour of assembly, 1 glass of Crown royal and some deep breaths, we have a couch in our den.  It is finally a useable room!!!
Notice the trunk finally made it's way to this room??  My mom found this trunk in her basement and brough it over.  Chris is "not sold" on this as a coffee table, but he will get used to it.
All I need now it to paint the walls a warm grey and to buy this rug. I'm now accepting dontations so I can some day afford it.
If you want to get this couch-in-a-box for yourself, you can get it at Cost Plus World Market.  Make sure you have alcohol in the house. Chris recomends that you skip the beer and go for the hard stuff.
Email Post