I have a love hate relationship with Ikea.

I love some items.  Like seriously love. And I hate others.

Some examples of love would be this faux fur rug.

I have two, one in our bedroom- on our hope chest at the foot of our bed, and another on the coffee table in the office.

If Chris wouldn't veto it, I may put one in every room.  I actually am thinking of adding one to the nursery. 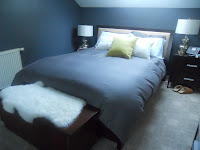 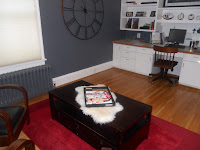 I also love their accessories and picture frames.

A good portion of our gallery wall is made up of Ikea picture frames, which are well made with clean lines and won't break the bank when you need 30-40 frames. 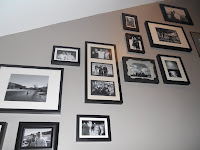 And did you know they sell fabric now??  Many of our cushion covers on our couch in the living room were made from Ikea fabric. 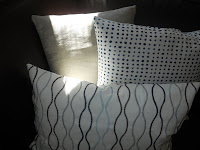 So, as you can tell, I have well documented love for the Swedes over at the big blue store, but I also have some hate.

Ikea has single handedly made me hate allen wrenches.

If you have never put together one of Ikea's pieces of furniture, then you have no idea what I'm talking about.

If you have, you know that 500 pieces, one Allen wrench and instructions that are written in pictures make for an extremely frustrating and patience-trying afternoon.

Chris refuses to build Ikea furniture.  He HATES it.  He would rather spend 3 times the price for something pre-assembled.

I, on the other hand, have slightly more patience and am fluent in Ikean... or is it Ikeaish.

There are only two reasons for me to ever buy non-assembled Ikea furniture 1. I can't find a similar item ANYWHERE else or 2. I want to pay rock bottom prices.

Today, I am being cheap.

We have had the same hideous dresser in our bedroom since we moved in, which happens to also be Ikea made and left over from our college days.  It never was meant to stay in our bedroom for any more than a month, but months turned into a year and a half, and finally enough was enough.
In my attempt to move my sewing room from the nursery into the guest room, I needed to upgrade the dresser in our bedroom to something that could hold more than 3 t-shirts in each drawer- which also will allow us to get all our clothes into our bedroom and out of the guest room (that dresser is going in the nursery).

So, I figured the next best thing would be to get a new, more substantially sized dresser to accommodate all of our clothes. I looked all around and found some beautiful dressers that would would be great, but they were in the $600-900 range.

Seems a bit pricey for a dresser that doesn't actually match or complete a set.

I kept coming back to the Ikea Hemnes chest of drawers. It is solid wood, which is what ultimately sold me.  The less particle board furniture in my life, the better.
It was on sale a few weeks back, making it $199, which was what put me over the edge.

You know I'm a sucker for a deal.

So I ran to Ikea on my lunch break (a perk of working down south), and swooped one up. Nothing like a full dresser that comes in 2 very compact boxes. 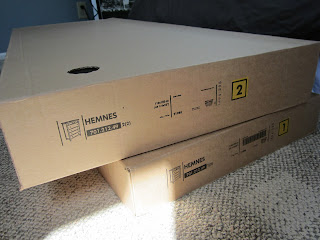 So, on the hottest day of the year (or close to it), I decided it was the right time to assemble the new dresser upstairs in the guest room, which had to be at least 10 degrees hotter than the rest of the house, putting it somewhere in the comfy, yet balmy, mid nineties.

I actually put a fan in the room blowing on me while I assembled, which really didn't do much but blow the sweat around on my forehead. (How's that for a mental image?)

I didn't have a ton of space to assemble the dresser, and it was too big to assemble downstairs and carry up, so I started unpacking and stacking all the items all over the room. 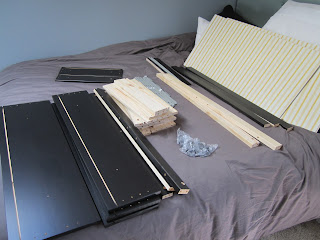 It took me over 3 hours to get the dresser together, lots of sweat, 3 ice waters (one per hour) and 6 extra screws (that's normal right?), but it is finally put together. 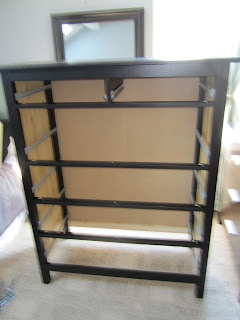 Chris moved it into our bedroom and I took on the next big job of transferring all our clothing from two dressers into one.

This was actually a great process because we both got rid of a ton of clothes we didn't need, that we had stuffed in drawers back when we moved in.

I love a good purge!  It gives me a reason to go to Goodwill (to drop stuff off and maybe browse around while I'm there).

I'm not going to say it is perfect, because for the scale of the room, it is a bit large.  But I love it. 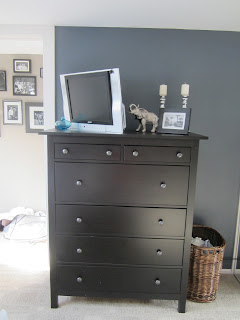 It holds EVERYTHING, which is awesome, and it allows me to make progress in both the guest room (turned sewing room), and the nursery.

So for $200 and 3 hours, it will work for the next few years until we either decide to overhaul our upstairs and make a bigger master bedroom (not likely), or we decide to get a new house (more likely). Then, we will get a whole new bedroom set, and this lovely Ikea dresser will go in either a kids bedroom or perhaps I will sacrificially burn it, along with any Allen wrenches I can find.
I'll make it into a party- admittance is one Allen wrench.
Email Post