Last week, we had family over to our house.  We had some lovely take-out food (after all that Thanksgiving cooking) and a few bottles of wine and we started talking about our house and how far it has come since we moved in.

Somehow, I ended up telling the story of our coffee table, that had been destined to become a tufted ottoman.

In case you are new, the cliff notes version is that I bought a round wood coffee table on Craigslist from a 9 year old Punky Brewster look alike, and then forgot it was in the back of my rental car. I ended up having to drive all over the Puget Sound region to get that darn table back, and then, when I finally got it home, I was much too tired to create the tufted ottoman of my dreams. 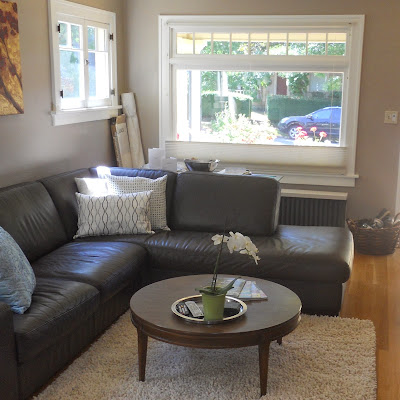 So, after telling the much longer version of that story over dinner, I vowed that I would finally get on that already and actually complete that project.

It may have been my longest outstanding project, so it felt really good to finally dive in.

I had all the materials on hand, since I had planned to do this project forever ago.

So, I put Hunter down for a nap and got to it.

I pulled up Abbie, from M is for Mama's tutorial and went to work.  I strayed slightly from her way of doing things, but she was definitely my guide.

First I ran around the house grabbing crap from nearly every room in my house to assemble my arsenal:
I figured I would start by tracing the table on the foam.  And since I couldn't cover the whole top of the table, I had to secure two pieces together.  I used some hot glue, and it worked like a charm. 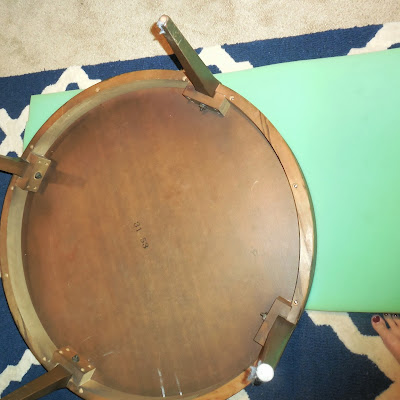 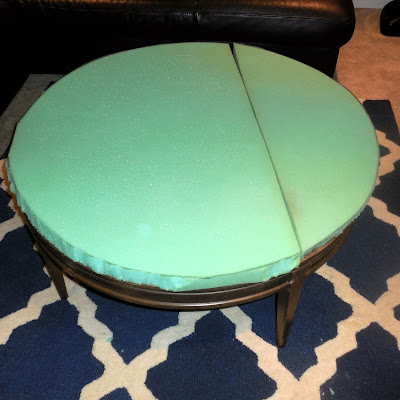 Once I got the foam secured, I needed to create the holes for the tufting.  This process was not nearly as scientific as it should have been.

I ran around looking for my yard stick and I couldn't find it.  So, I created a pseudo-ruler out of a scrap of foam, to try to measure equidistant holes. That only kind of worked.

I half winged it, and half measured.  I actually tied my pen to a string and used it as a make shift compass.  That was actually the most successful part.

I drew the circle and then measured out 7" between holes. 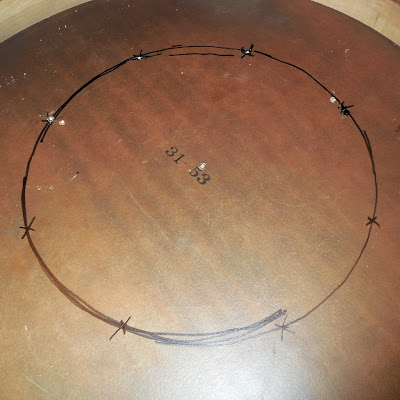 I did the same thing on the foam as well, so I ensured I was lining everything up.

The absolute worst part of this project was realizing that the top of the table, although it looked like wood, was not, in fact, made of wood.  It was made of formica, and that stuff is stronger than concrete.

I only realized it was not wood, after I broke 2 different drill bits trying to get through it.

Ugh, I wish the faux-Punky Brewster had mentioned that....not that I would have even remembered that tidbit two years later.

So, to create the tufting holes, I had to hammer a nail through the bottom side of the table, which started the hole, then slowly and carefully drill though the rest of the way.

It was a slow, sweaty and tedious process, but I finally got all 9 holes drilled.  After about 3, I was really regretting my amount of tufting.

So, once my holes were drilled, I also had to "dig out" the foam, so that my tufting buttons had a place to rest.  I basically just used my scissors and cut out chunks and then ripped it with my fingers until it looked about button-sized. 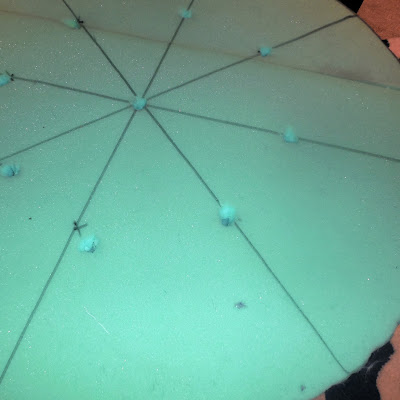 After I was done with that awful step, I realized I should probably make my buttons to tuft with.  They were rather simple, but kind of tedious.  I just followed the instructions, and to ensure that the buttons didn't come apart, I used hot glue to secure the back to each button- like a bit of extra insurance.

Luckily, Hunter was still asleep and since making buttons is some what mind-numbing, I decided to start watching Orange is the New Black, which is intriguing, but the jury is still out if I'll invest in watching the whole season.

I had finished making the buttons and was taking a brake while finishing up the first episode when Hunter woke up.

It's like he could sense that I was relaxing, and he had to put an end to it....

Anyway, I put my project on pause and hung out with him for an hour and made him lunch.

I decided that maybe we could do the project together after lunch- meaning he would play with the left over foam (that sounds fun right?) and I would get the ottoman done before Chris walked in the door.

That was wishful thinking, because all he wanted to do was put the newly completed buttons in his mouth.

So we decided that we would hold off on working on projects together until he grows out of carrying things in his mouth.

When Chris got home, I abandoned Hunter let Hunter spend some time with his dad, and I ran back downstairs to complete my project.

My next step was to cover the whole thing in batting.  First, I wrapped it around the outside, to cover and soften the exposed wood.  I used my staple gun to secure it. 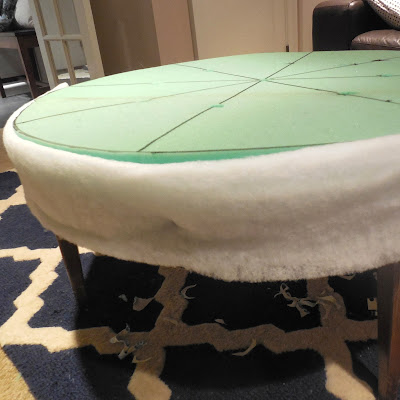 I then stretched the remaining batting over the top.  I covered that with my fabric and ensured that there was overhang to covered the sides all the way around. 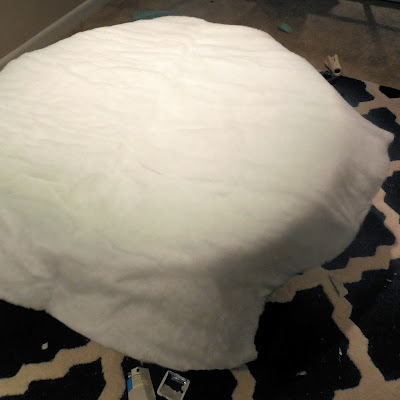 Then I started tufting.

I tufted before I secured my fabric.  I started with the center tuft and worked my way outward and around the circle. 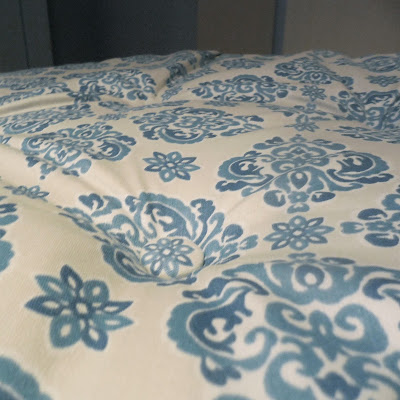 I pulled my fabric taught before I made the tuft.

Oh, and something I learned was to put a piece of extra fabric on the underside of the table and use it as a "stopper" for my button, so it wouldn't come undone.

Once all my buttons were in, I started stapling my fabric to the under side of the table. I went slow, carefully pulling the fabric before stapling, and since I was working with a rectangle piece of fabric covering a round table, I was careful to pleat the fabric every so often, so I didn't end up with excess on one side.

There was no science to this step, I just tucked it in every so often so it looked intentional.

The hardest part was figuring out to handle the legs.  Again, there was no science to this, I just eyeballed it and made 2 slits where the edges of the leg were and then tucked the fabric up and around the leg.  It worked out just fine. 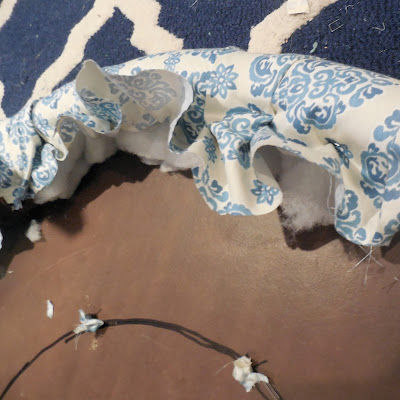 After I had gone all the way around, I went back around a second time, tucking up the loose edges and making them look cleaner (not that I'm very concern about the underside of my table).

And that was the final step.

In one afternoon, it went from this: 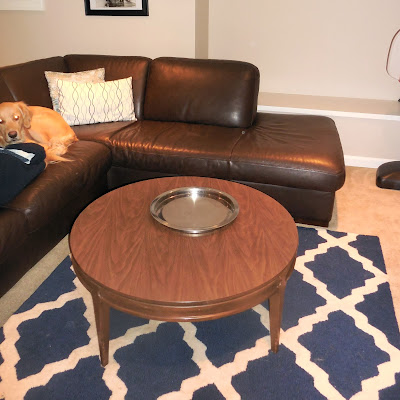 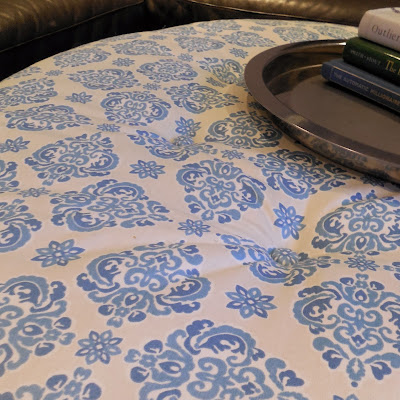 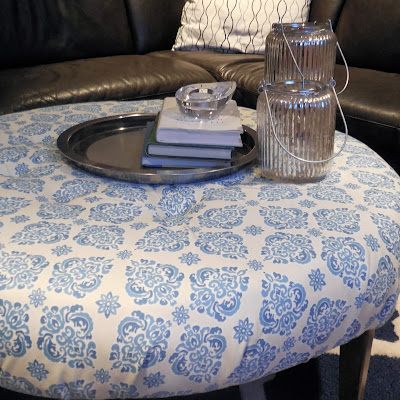 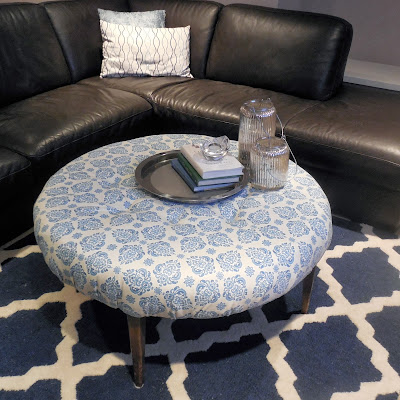 What was I waiting for?

It is not 100% complete.  I still need to add the upholstery tacks and I want to break out a different, larger tray to use.  I will also probably paint/stain the legs and swap out the fabric every so often also (spot cleaning will only go so far with a baby, a puppy and a world class spiller [me] in the house).

Right now I'm basking in the glow of ottoman 1.0 and the fact that I actually finished it.

I actually have my feet up on it as I type this.  And they feel so nicely cushioned.
Email Post