The year of the coffee

The Chinese zodiac calendar has listed 2016 as the year of the Rat.

I have listed 2016 as the year of the coffee...as in this is the year that I will start drinking coffee.

Because I need it.

And by it, I mean caffeine.

My darling second born child has the same poor sleeping affliction that his older sibling had until he was 14 months old. The little guys has now passed the 15 month mark and still wakes up multiple times per night.

In my mind I was waiting for the magical 14 month mark when Carter would miraculously figure the whole sleeping-through-the-night thing out, and we would all high-five and live happily ever after.
14 months came and went with no high-fives...actually we had a surge in middle of the night wakings.

Over the holiday break there was a point where my dear child was up 5 times per night for multiple nights in a row. It nearly killed us all (except Hunter, he now sleeps like a rock). There is a reason why they use sleep deprivation as a form of torture.

So, somewhere around December, I decided that I needed more sleep and caffeine in my life, and clearly I was only able to control one of those two, so I chose the sure thing.

I know its hard to believe that I have never drank coffee, especially in the coffee capital of the world.
I have never enjoyed the taste or even the smell of coffee.  When everyone was slurping down frappaccinos in high school (which, I realize is pretty much coffee adjacent) I found my love of Diet Coke and that became my caffeination stand by. Unfortunately for me, I can't get my body to drink soda until after noon- so after a night of 4 hours combined sleep, I need something to get me up and out the door.

So, this is my year. Coffee and I are going to get well acquainted.

I waited to have my inaugural cup until the new year, at our favorite coffee shop in Sun Valley- Java on 4th. They make a Bowl of Soul, which is basically a mexican hot chocolate, with a shot of espresso and a shot of drip coffee, topped off with a big swirl of whipped cream and a  sprinkle of cinnamon. 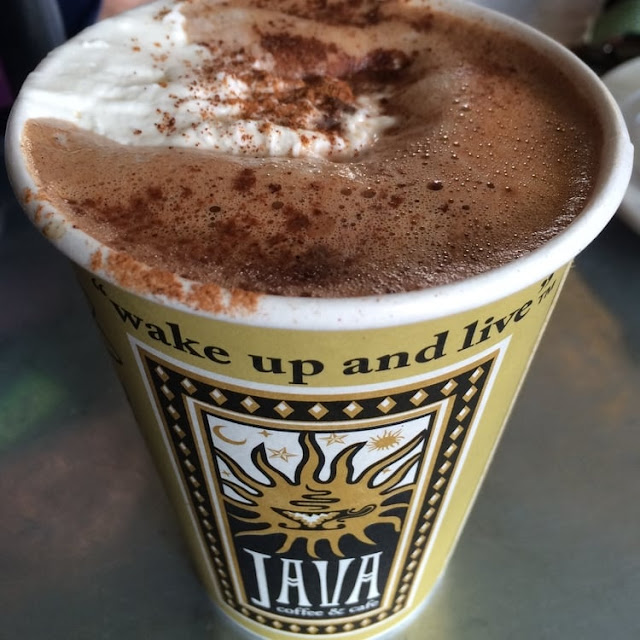 It's a pretty delicious entry into my coffee drinking habit.

I only got about a third of my way through it before the coffee taste was just too strong, but I've made my own rendition at home (more hot chocolate, less coffee) and really liked it- although I realize I'm not getting very much coffee.

By the end of the year, expect to see me ordering black coffee like a pro.