'Tis the season for kids getting sick.

Seriously, unless you stay quarantined in your house for the next few months, your children are bound to contract a series of illnesses. I don't know if it is the changing of the weather or my son's desire to wear basketball shorts with his rubber boots when it rains (I had no idea the athletic shorts in the winter thing started as young as 3 years old)- but it seems like winter colds are upon us.

Unfortunately on Friday night Hunter's little sniffle and cough turned into a full blown fever and a cough that rattles his whole body.

So we had to cancel Halloween.

Luckily, our neighborhood held their trick or treat on Friday afternoon, so Hunter got to partake in it before his health took a turn.

We met some of our best friends out on Queen Anne Ave, for a wonderful afternoon of chaos and sugar highs. 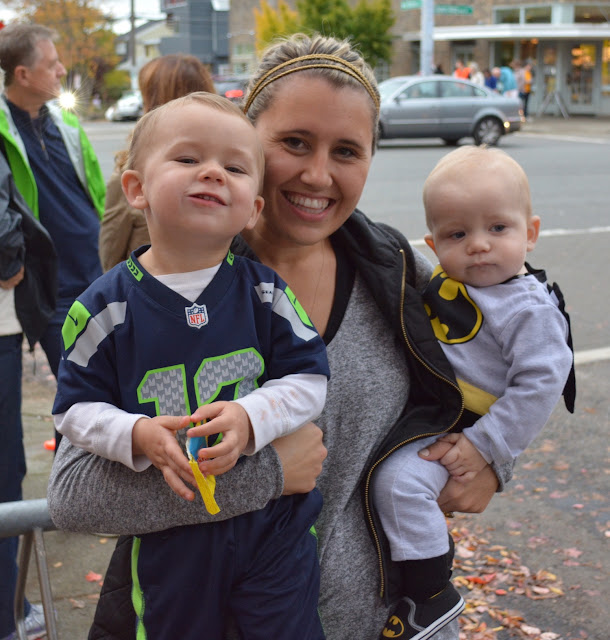 If you had have asked me last week, I would have sworn up and down that he would be a super hero for Halloween. I knew that WHICH super hero would be a game time decision, but it was a close contest between Spiderman, Batman and Captain America.

Then, oddly enough, he decided with an old standby- Russel Wilson (yes I realize he is wearing the wrong number jersey).

Considering Hunter wears his Seahawks jersey at least once a week, he didn't really look like he had dressed up, but to him, it was a perfect costume (although the helmet got in the way of his candy eating) and the eye black I tried to apply was "too sticky" so he looked rather underdressed when we finally left the house....but when you are 3, it really doesn't matter.

Carter rocked the baby Batman look that Hunter picked out for him- and since he wasn't going to be chowing down on any candy, he did decidedly less trick or treating and more observing from the stroller.

Even though we had to skip the real deal, we did plenty of other Halloweeny things this month that kicked off the fall season.

We took the kids to the pumpkin patch the first weekend in October, which was great because we beat the crowds, but our pumpkins didn't actually make it all the way to Halloween. They literally disintegrated into liquid on our porch.  Ewwww.

But we did get our fair share of cute pumpkin patch photos- so all was not lost.

Hunter also totally enjoyed carving the pumpkins this year. He loved to scoop out the guts- and if we had have let him, he would have grabbed a knife and carved the pumpkin himself (don't worry we didn't let him).

Carter liked that we were all sitting on the floor with him, and getting his hands all goopy. Both boys love doing anything naked or in their underwear, so it was a win for them (and less laundry for me).

And amidst the chaos this month, I was actually able to decorate the house, not once but twice (due to another party that happened mid month), and Hunter was again, obsessed with the decorations.
Hope you had a wonderful Halloween, with a few less germs than ours.

Cheers to the beginning of the holiday season......
Email Post