State of the household

Sometimes blogging is a lot like going to the gym.

I think about doing it.

Then, I end up putting on my pajamas, drinking a glass of wine and watching Scandal instead.

I get sidetracked...story of my life.

I never intended to take a month away from this little corner of the internet, but then a few days become a few weeks, and all of a sudden it's June.

You know what June means?

None of those things are done.

I barely register how fast time is passing...maybe I'm in denial. Someone asked me the other day how old Carter was....Chris had to correct me, because I was a month off. Apparently I left my brain somewhere back in April or May.

Wanna take a guess as to the status of planning their birthday parties?

If you guessed that I haven't thought about them at all, you would be right.

So, basically I've got quite a backlog of to-do's going; get in line, blog.

When I don't have time to blog, I do post pictures of my oh-so-thrilling adventures in motherhood over on Instagram. Feel free to follow along over there.

Now, since it's been a while, here is the state of the household:

New House:
Building your own house is a LONG exercise in patience (of which, I have none).

It's a bit like trying to get discharged from the hospital after having a baby...

There are 97 forms you have to sign (in triplicate), 17 people who have to examine you (4 of whom only work for 15 minutes every other Tuesday, and all of whom are going to bill you exorbitant amounts) and a whole lot of anxious waiting around wishing you were already relaxing at home.

We are in the picking out phase- which, I'm sure, is the technical term.  Right now, Chris and I are scurrying all over town comparing styles of door knobs, discussing the merits of under cabinet lighting, diagreeing over faux stone vs. real stone on the chimney and making a pro/con list of having a central vacuum system.

One thing is abundantly clear.  We have champagne taste (which we already knew) and we need to get on a Charles Shaw budget. We need to reign it in and figure out where to invest the money (hardwood floors) and where to be budget conscious (door knobs).

Oh, and we are STILL waiting for permits.  So now we are estimating an August start date.

Chris:
My smart and dedicated hubby is days away from graduating with his MBA.  He has worked so hard for the last two years to manage his business, keep up with school, be a full time dad and manage the whole new house process.

Being proud of him and all he has accomplished doesn't quite cover how I feel. Way to go babe, you are a rock star.

Hunter:
I can't get enough of Hunter's little personality.  He is funny and silly and absolutely the sweetest little guy (and quite a handful of toddlerness).

Last week over dinner, he politely told Chris to please not touch his "tickle pits" because it makes him laugh, and he can't laugh while he is eating. We about died.

Tickle pits, for the uninitiated, are his arm pits...which apparently tickle.  He's way ahead on the word merging. It's the Brangelina of toddlerisms.

I am going to miss his made up terms and incorrect sentence structures as he gets older. I love to hear him tell me my toothpaste is "too pie-see."

He is still VERY into costumes and dressing up in full uniforms.  His latest loves are astronauts and pirates. He went to Little Gym in his full astronaut suit and helmet recently- I'm sure he was the talk of the class. The only problem is that he is getting too smart for me and when I get him dressed he requests things like astronaut socks and boots....and he isn't really buying the fact that astronauts wear rain boots anymore. 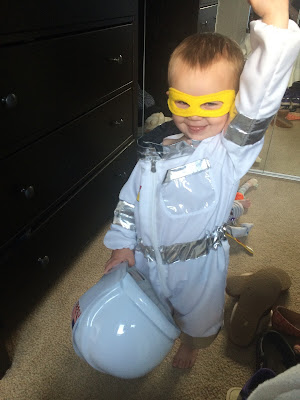 Carter:
Our little guy is not so little.  He's a bit of a tank- only 9 pounds lighter than Hunter- and gaining.  We keep warning Hunter that Carter is going to get bigger and soon he will be the "thump-ee" instead of the "thumper" (and Hunter deserves some pay back for his thumping).

He lights up when he sees someone he loves come into the room.  His whole face glows and he can't stop looking at them.  I was nursing him the other morning (his favorite activity) and Chris walked into the room.  He spit out the boob and just smiled, giggled and coo-ed at Chris.  It wasn't until Chris had come picked him up, kissed him and then left the room that he would go back to nursing. I get it kid, your dad is cooler than me....even with my top off.

Baby Carter is totally mellow.  He hangs out and is generally a happy guy.  He has absolutely no interest in crawling or being on his stomach ever (much like Hunter).  He is content to sit in one spot and have things brought to him, like a little prince.

Things he sucks at: sleeping & eating real food.  These baffle me, because both Chris and I are champion sleepers and eaters.  Where did this kid come from? 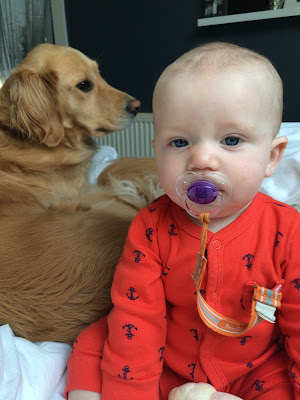 Ketchum:
Ketchy is now 3 years old and still has quite a bit of puppy left in him. He still gets uncontrollably excited when people come over to the house. He wiggles and waggles and jumps and barks and generally loses his mind.  We are working on it- but not very hard.

He (along with Hunter) is working on digging a hole in our back yard straight to the center of the earth. It is so deep that Hunter can fit his whole body inside it (and he does).

He has grown into quite the guard dog.  He barks and growls at neighbors, mailmen and anything else that moves. He puts on a show, but if anyone actually came in the house, his only defense would be to lick them to death. I actually don't mind the barking so much, since Chris has been traveling a lot for work and it makes me feel safer knowing that Ketchum will sound the alarm if he hears anything.

Now if only I could get him to stop shedding and wipe his paws when he comes in the house. I'll put those down for 2016 goals. 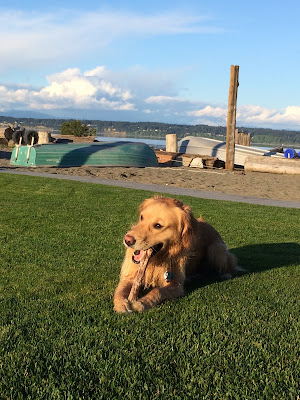 Ashley:
I can now add "Ordained Minister" to my resume.  I recently got ordained by an online church and am now licensed to perform marriage in Washington State.

I am going to be the officiant for some dear friends as they get hitched this summer. I'm equal parts excited and terrified...which I think are their feelings as well, since I keep mentioning that I am thinking of doing the whole ceremony in song, or flash mob style, or that I plan on wearing a unitard, or better yet, my high school graduation gown (which happens to be bright yellow). All joking aside, I am totally into the idea that I get to be the person to join them together forever. How cool!

I actually got to test out my marrying skills already for one of my best friends in the entire world.  She had already gotten married on a beach in Mexico (in one of my favorite weddings of all time), but needed to make it official here in the states, so I got to sign the official form. Although it was more of a technicality than a ceremony, I loved being part of their union.
Perhaps I've found my life's true calling???? Let me know if you are in need of my services. I come cheap.
So there you have it. I'm back and I'm going to try not to disappear again.

I'm off to go clean my house before the housecleaner comes...don't even get me started on the craziness of this.
Email Post